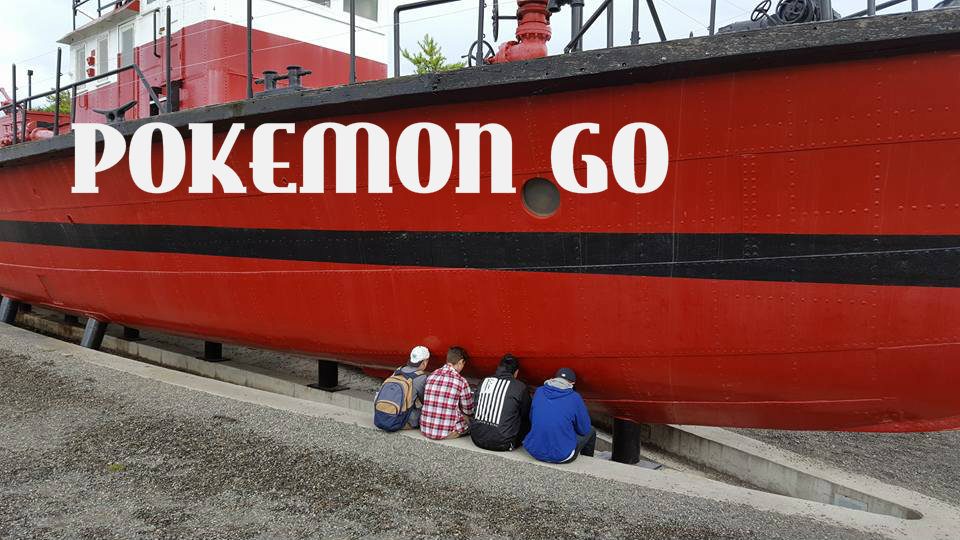 For all those who are confused by the congregating folks you keep seeing in parks and public places glued intently to their phones, and sometimes walking into walls or large objects. Not kidding, this seems to be a hazard that comes with the territory of the game. LOL!  🙂   I’ve been hearing a lot of talk about the new apparently highly addictive virtual game, called Pokemon GO. I’m sure that you’ve heard of it. It’s a little hard to miss if you’re out and about in just about any public area in any city on the planet, especially on the weekend. However, you will also find many of these avid participants in the wee (and I mean WEE) hours of the morning or night, in parks, zoos, along walking trails and other public settings.

Now, we know that Pokemon in video gaming has been around for a long time, but in the past you needed to be sitting in front of a monitor or TV to play. This next generation game called Pokemon GO is an app on your phone, which allows (nay, guides you by GPS, by the way) through a virtual gaming experience. Yes, a VIRTUAL experience. THIS IS WHERE I BECAME INTERESTED! I began to see these groups showing up all over the place at the strangest times, intently staring at their phones. As an intuitive person, I have an enquiring mind and I needed to know what this was all about.  🙂   So, began my discovery of Pokemon GO. I have for some weeks now, been connecting with these very engaged gamers and I have had a blast with everyone. From the group in my cover photo lined up against a local attraction (a large ship) with heads down against the hull to better see their screens, to groups standing out upon the piers frantically looking for what they knew was there, but could not see with their eyes. These people are deriving benefit from the exercise they are getting, seeing local sights that they have maybe never seen before, and are supporting local business when they get hungry or thirsty. I have had the best time with my research on this subject. What a blast!

I’d like to share more of my findings or insights, and put them into a spiritual perspective for you, because this is kind of what I do.  🙂   What I see happening, yet not all inclusive, is a lesson in spiritual warfare and perseverance in life. Very young tikes and lasses all the way up to the mature (as you will see in my interviews) are suddenly out of the house, engaging in what I see as very practical tactics in advancing in life itself and in the spirit. I see them moving almost by radar, yes it’s GPS, but it’s not something that they can see with their natural eyes. They have to keep their sight on the device in hand to get to the desired destination for apprehension of what awaits. They are learning to trust a source that they technically cannot see. This of course, is something that we all need to be adept in, if we expect to get through life by The Spirit and apart from our sometimes faulty intellect. Not that we don’t use the smarts that we have, but more that it is sometimes best to be led by a higher power. Something or someone who knows more than we do and has our best  interest at heart.

They are also  learning to be offensive, instead of defensive. For those who are called to fight battles in the spiritual realm on behalf of themselves and others, this is quite an exercise. We know that to wait to be attacked before you react in battle is not a rational method of warfare. If you are waiting to be assaulted, you surely will be. So, the whole pretense of the game is that you go after what you “see” on radar/GPS and take it out. Isn’t this the operation of all “seers?” There are so many people today who need instruction in these necessary skills, and where do you get these lessons? Academia is for head knowledge, but not usually for any form of spiritual understanding. So, for most of us, we either get it by accident in life circumstances or we miss it all together…or we play virtual interactive games with pertinent training.  😉   Hey, whatever it takes, right? We know that there are elements out there that would oppose us and attempt to keep us from stepping into our true destiny. To me, this is a study in recognizing those things that are hanging around with no real purpose in our life’s walk. They are certainly not useful. Let’s get rid of them. Those are things you will personally need to make a decision to go after and take out, right? No one can do that for you, by the way. You’ll need to learn to identify and take your authority to remove and resolve. If they do not serve you in a positive way, then take those “psyducks” out people!

This is also such a cool picture of us learning to go after what WE WANT OR WHAT IS OURS. Some things (visions, life dreams, promises for our future) which are ours are not yet realized and out of sight, however we know that they reside somewhere around or close to us. The gems that they need to hold onto in the game may depict the treasures that are ours to keep. They may be our gifts, skills, propensities. Maybe they are our potential, and we cannot see it, but it’s there right in front of us and all we have to do is grab it. You cannot apprehend what you are not yet aware of. You cannot take what you cannot “see.” The Spirit can guide us to all the promises for our lives, and show us where they dwell in wait for us to step into and employ for our lives. Of course, we must also be strong and persevering to take the promises of success. Much like the radar affect in Pokemon GO.

There is always the opposition of unbelief, discouragement and sometimes hopelessness, which attempts to keep us blinded from the blessings that are truly ours. I see taking out the Pokemon as alleviating what keeps us from getting what is connected to our destiny (those needed treasures). So, I relate the gems to those dreams that we want to take and utilize to enrich our lives. If we could travel by radar, “seeing” what is before us, we might better understand the next important steps in life’s ascent. There are many more aspects of the game such as the four elements and then some, the different categories of Pokemon and how they can overpower one another, to steal energy. I won’t go into all the too-many-to-mention details of the game, but all seem to have a strong spiritual parallel if your “seeing,” or you’re asking me.  🙂

Check out other benefits in the video interviews. They are such wonderful and cordial people and a sincerely nice community. Continue to grab those critters, Pokemon GO players! I’m rooting for you!

(Pokemon GO is actually the brainchild of the long time famous Japanese video company, Nintendo. Of course, many brains were involved in the mastery of this product, and you can see that information in the link I’ve provided HERE.

On July 26th, Forbes Magazine said, Since its July launch Pokémon GO, a free “augmented reality” game by Niantic Labs in which players capture virtual characters mapped to real-world locations, has piled up superlatives. If you’re interested in more details, see more HERE. Whether you get a kick out of the idea or you’re agitated with it, it is probably around for a while.

Wikipedia says, Pokémon GO is a free-to-play, location-based augmented reality game developed by Niantic for iOS and Android devices. It was initially released in selected countries in July 2016. In the game, players use a mobile device’s GPS capability to locate, capture, battle, and train virtual creatures, called Pokémon, who appear on the screen as if they were in the same real-world location as the player. The game supports in-app purchases for additional in-game items.)

Spirit Of A Dead Child

Hi Melody, I listened to your talk with Rachel Hamm the other day. I thought about your three year course, and maybe I would like to join it. I have never prophesied over anyone. However, I live in Yokohama, Japan and I feel like I’ve reached a ceiling as to help the Japanese come to know Jesus. If I could speak into their lives, maybe I can help them to tear down the walls they’ve built between themselves and Jesus. Do you think I could do this? I’m 58 years old, and have been a Christian for 25 years. I knew God would send me here, and I obeyed—my husband is Japanese. But I feel like I’m just a holding marker here and that’s all God is using me for. I had a dream that I was in a kind of prison having only movie reels to look at. In real life, I watch a whole lot of prophets, and am super open, even desperate for a gift of the Holy Spirit, but I haven’t stepped into anything yet. Sometimes my trying to get some kind of anointing causes me to fall into burnout, and I take a rest for a while. Can you help me get started?